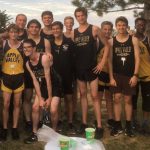 After finishing eight points out of first at the St. Michael-Albertville Invitational last Thursday, Apple Valley’s boys’ cross country team took the next step on Friday, with its first team championship in a varsity race in six years. The Eagles took three of the top five spots at the Red Wing Invitational on Friday, scoring