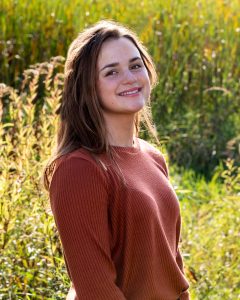 Sydney is a member of the Apple Valley High School E3 STEM program which is nationally recognized as one of the best in the country. She has also been a member of AVHS Student Council and a leader/participant in the Women in Sports Leadership Empowerment Workshop.  Johnson has volunteered numerous at Fairview Hospital and Trinity Care Center in her spare time. She has also shared her joy of being an athlete with youth softball and hockey players from the City of Apple Valley and other surrounding Areas.

As a Student-Athlete Johnson has earned 9 academic letters, been named to Region 3AA –All Section Academic Team and Academic All-State.  Sydney’s greatest accomplishments athletically have been as a two-time Team Most Valuable Player for her High School Hockey Team, 2020 Defensive Player of the Year and Team Captain. She is known affectionately by some as the “Iron Woman” of Apple Valley Hockey, playing in over 134 Varsity Hockey Games. Another notable memory is that she also played in the infamous six overtime High School Hockey Game which is recorded as the longest hockey game in Minnesota High School Hockey History- (123 minutes long). 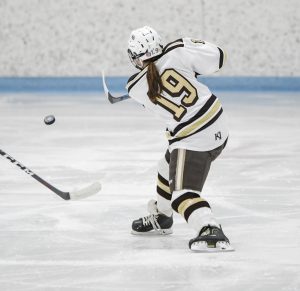 As a Softball athlete, Sydney is a two-time Team Captain and two-time All- Conference Player. In addition, Johnson is considered one of the most feared hitters in the South Suburban Conference.

Next year, Johnson has committed to attending the University of Wisconsin-Eau Claire to continue her Hockey Career playing for the nationally ranked BluGolds. She is undecided about her major but is considering a major in Physics or Health Sciences.

The Athena Award is given to the outstanding senior female athlete in each school based on excellence and participation in individual and team sports.  Athena is the Goddess of wisdom and skills.  She was brave and possessed the essence of all that is noble. Sydney will be recognized next month at the annual St. Paul Athena Award Banquet’s new location at the Vadnais Heights Commons.  It will take place on Wednesday, April 22nd, 2020 at 11:30 am.  Please join us in celebrating our Athena Award winner.

Boys Freshman Baseball A vs. Prior Lake High School

Boys Freshman Baseball B vs. Prior Lake High School