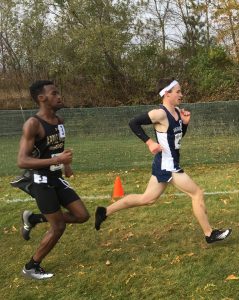 Khalif finished 51st in the Minnesota State High School League Class AA meet on Saturday, covering the 5,000-meter course in 16:28.25. It was the fastest an Eagles runner has gone at state since Paul Sampers ran 16:22 in 1982, and the highest place at the state meet since Greg Dowe finished 48th in 2004.

His performance at the state meet concludes a season where Khalif broke the Eagles’ 39-year-old sophomore record, ran the fifth-fastest time in school history at the Section 3AA meet and posted Apple Valley’s best individual finish (10th) at the South Suburban Conference meet since Grant Udelhofen in 2014.

He heads into the offseason with an eye toward a promising track season, where both Khalif and senior Maquanet Collins return as two of the state’s fastest 800-meter runners. Khalif’s personal record of 1:57.7 (set at the Section 3AA meet last spring) is the 11th-best returning time in the state, while Collins’ time of 1:57.99 is tied for 14th with St. Paul Highland Park’s Oliver Paleen, who won the individual state cross country title on Saturday.