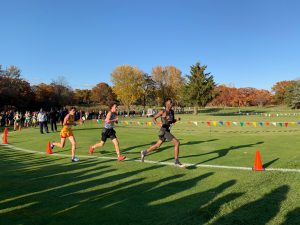 With the fifth-fastest time in school history — and the fastest ever by a sophomore — Abdikafi Khalif punched his ticket to the first state meet of his career.

Khalif will compete at the Class AA state cross country championships after finishing eighth in the Section 3AA championships at Valleywood Golf Course on Thursday afternoon. He held his spot near the front of a talented field, through a fast early pace and a difficult set of hills, to become the first AVHS state meet qualifier since Robert Hapke finished sixth in the section in 2015.

His eighth-place finish, and an 18th-place showing by senior captain Maquanet Collins, helped the Eagles to sixth place as a team, two spots higher than they finished in 2018. Apple Valley’s average time of 17:01 was its fastest ever at Valleywood, surpassing the 17:04 mark it set in 2012.

Collins, who finished in 16:27.8, matched the 23rd-best time in Eagles history with a personal record of more than 32 seconds. Khalif and Collins were two of Apple Valley’s five runners who knocked more than 30 seconds off their previous PR, and all seven Eagles runners ran the fastest times of their careers on Thursday.