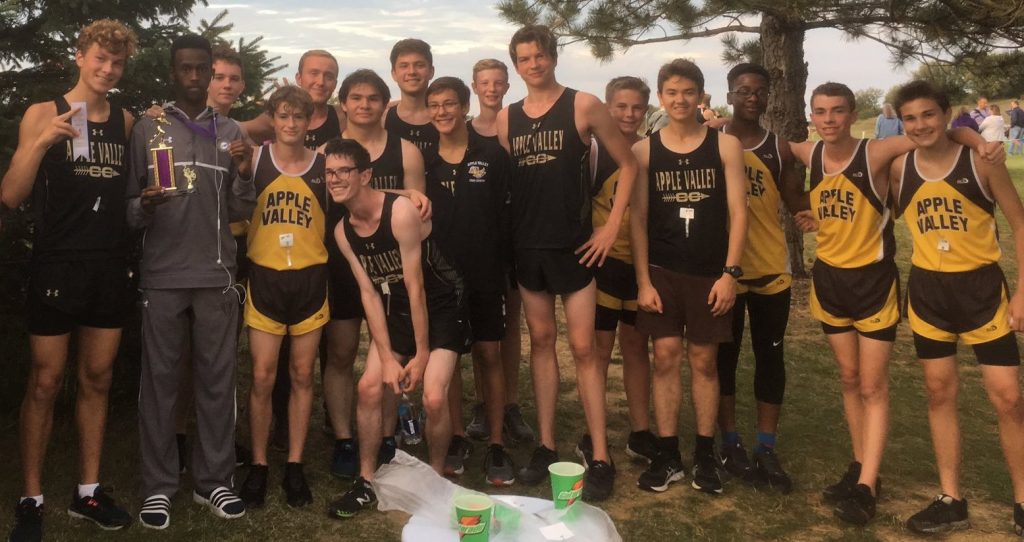 After finishing eight points out of first at the St. Michael-Albertville Invitational last Thursday, Apple Valley’s boys’ cross country team took the next step on Friday, with its first team championship in a varsity race in six years.

The Eagles took three of the top five spots at the Red Wing Invitational on Friday, scoring a total of 61 points to win the boys’ varsity race by 12 points over Woodbury. Six of Apple Valley’s eight runners posted personal records in the varsity race, with another 16 doing so in the junior varsity race.

Sophomore Abdikafi Khalif, who battled Woodbury’s Aidan Browne for the lead over much of the race, finished second with a PR of 16:46.74, running the seventh-fastest time by a sophomore in school history. He was followed by senior Maquanet Collins, who used his exceptional speed to sneak under the 17:00 barrier for the first time in his career. Collins finished in 16:59.90, good for third place in the race.

Senior Elliot Ewald continued his impressive season with a PR of more than 20 seconds, running 17:23.4 to finish fifth overall, and senior Chase Nord also kept up his surge, running a 31-second PR of 18:07.58 to take 18th place. Junior Riley Smith (18:37.5) rounded out the Eagles’ scorers with a 34th-place finish.

Apple Valley’s sixth and seventh runners — freshman Mason Phoulavan and sophomore Abram Liszka — teamed up to run big PRs and finish the race together. Phoulavan cut 43 seconds from his previous best, placing 36th in 18:48.34, while Liszka’s time of 18:48.74 was good for 39th, as well as a 27-second PR. Junior Elijah Gordhamer, coming off a breakout performance last Thursday at St. Michael, rounded out the varsity lineup in 70th place, with a time of 19:25.63.

The Eagles have two weeks to train before their next race: the South Suburban Conference Championships, which are scheduled for Oct. 11 at Eagan High School.