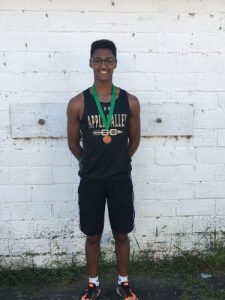 A year ago at the Faribault Invitational, Maquanet Collins ran his first high school 5K race as a junior still unsure of how good he could be. He left little doubt when he ran the course again on Friday.

Collins — coming off a track season where he finished with one of the best 800m times in the state and anchored an Eagles 4x800m relay that finished third in both the conference and section — took 13th place in the Faribault Invitational on Friday, running the best 5,000-meter time of his career by 16 seconds. He finished in 17:16.3, pacing the Eagles after leg cramps forced sophomore Abdikafi Khalif — Apple Valley’s top runner in its first two meets — out of the race.

Without Khalif, who was in the top 10 at the time he withdrew from the race, the Eagles finished tied for eighth with 227 points. They ended the day in ninth place after losing a tiebreaker with Heritage Christian.

Senior Elliot Ewald also continued a strong start to the season by running the fastest time of his career on Friday, finishing 27th overall in 17:48. Senior Chase Nord — whose personal record before Friday was 19:56 — had a breakout race, finishing in 18:41 to take 58th place.

Apple Valley is in action next on Sept. 19, when the Eagles make their annual trip to the northwest metro area for the St. Michael-Albertville Invitational.

Boys Freshman Baseball B at Burnsville

Boys Freshman Baseball A at Burnsville