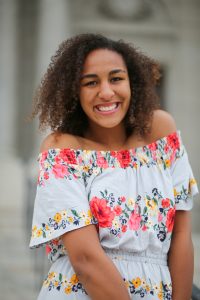 She currently serves as President of AVHS National Honor Society, is a founding member of the Black Student Union and was elected by her peers to represent them as a member of Student Council. Parham also participates in Apple Valley’s E3 STEM Program. Parham has also been named Academic All-State and Team Captain four times.

Parham was the Section 3AA High Jump Champion in 2018 and Section runner- up in 2017 earning a 6th place finish at the MSHSL State Meet. She was also a South Suburban All -Conference selection in Basketball in 2018.

Next year, Parham has committed to her career as a student-athlete and play Division 1 Basketball at Creighton University.

The Athena Award is given to the outstanding senior female athlete in each school based on excellence and participation in individual and team sports.  Athena is the Goddess of wisdom and skills.  She was brave and possessed the essence of all that is noble. Mykel will be recognized next month at the annual St. Paul Athena Award Banquet’s new location at the Vadnais Heights Commons.  It will take place on Wednesday, April 24th, 2019 at 11:30 am.  Please join us in celebrating our Athena Award winner.