After suffering an opening day loss to a solid squad from Minneapolis Washburn, the Apple Valley Boys Tennis Team looked to bounce back at the Hastings Invitational.  The tournament was held in blustery conditions as the temperature never got above 40º.  However, the Eagles were hot, winning three matches en route to the tournament title.

The Eagles, under the leadership of new Head Coach Craig Raway, opened the tournament against the host school Hastings Raiders.  Ironically, Coach Raway has deep ties to Hastings; he graduated from there and is the current Head Girls Tennis Coach for the Raiders.  The Eagles would get Coach Raway his 1st career victory as the Eagles Boys Head Coach as they won a tight 4-3 victory.  In round two, the Eagles dominated Roseville, cruising to a 7-0 victory.  In the final round, the Eagles faced a strong team from Hudson, Wisconsin.  There were many tight matches and Apple Valley was able to secure wins at #2 singles (Sam T.) and #3 singles (Derek D.) as well as at #2 doubles (Bailey/Kory) and #3 doubles (Isaiah/Nakhil) earning the 4-3 victory and the tournament championship. 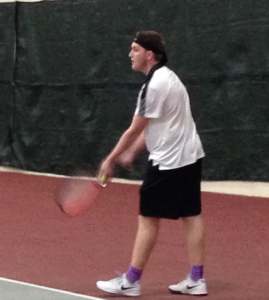 The team hits the road this week as they travel to Rosemount (Tuesday), Bloomington Jefferson (Wednesday) and Lakeville North (Thursday).  The JV will be at home for all three matches this week.